This FAQ is adapted from actual questions we’ve received. And we’re happy to answer more.

I’ve never heard of this guy. I wish there was more information about his case, but I’m not signing the petition without details.

Thanks for your willingness to learn more! We’ve put all of the basics on this page. 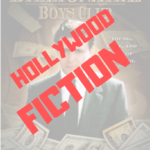 Isn’t he the Joe Hunt from Billionaire Boys Club movies?

Yes, the same. But movies often get the facts wrong.

There are many reasons why we believe Joe Hunt is in fact, not a murderer, but here’s one big one: there was never a body found in the Ron Levin murder case.

Then there’s the fact that his judge was known to side with the prosecution, regardless of evidence, the fact that Joe had his Sixth Amendment rights violated by an incompetent trial attorney and the fact that when Joe faced a second trial with a great attorney — himself — he convinced a majority of jurors that he was innocent.

Plenty of murderers get life sentences, and Joe was the mastermind. Why should he get special treatment?

Yes, it’s true: plenty of murderers get life sentences. For example, the notorious psychopathic cult leader Charles Manson got a life sentence for his role as mastermind of nine separate murders. But Manson got life WITH the possibility of parole, and he was given multiple opportunities to go before a parole board and plead his case for rehabilitation and release.

As strange as it may sound, at this point, we would be happy if the justice system gave Joe Hunt the same treatment as it gave Charles Manson:  a parole hearing.

How about the whole story? Not just the pieces you choose to tell us… we want facts!!!

Great! The more people learn the facts, the happier we are! Too many people only know the tabloid TV version of this story.

There’s a lot of information out there, but we’re very clear about the fact that we believe Joe is not a murderer, and we created this site to share our reasons why.

We’ve got many, many legal documents on our site, but if you want to see other reputable sources of information, an interesting place to start might be this Associated Press article about Ron Levin sightings, or this Los Angeles Times article about the biased judge in the case.

What was the evidence that was strong enough to put him behind bars without a body?!

Mostly circumstantial evidence, plus the testimony of the Billionaire Boys Club’s co-leader, Dean Karny, who promised to cooperate with prosecutors to save his own skin. In the Ron Levin murder case, no body and no forensic evidence were found, and the judge discounted evidence from witnesses who said they saw Levin alive after his disappearance.

You’re leaving out the fact that there were two murders he was accused of. What about Hedayat Eslaminia?

Yes, Joe was accused of the murder of Hedayat Eslaminia, but not convicted. In that trial, Joe acted as his own defense attorney and convinced a majority of jurors he did not commit the crime. These jurors also concluded, based on the testimony of multiple witnesses who passed lie detector tests, that Ron Levin was alive. The trial ended in a hung jury, and prosecutors declined to retry the case.

Hedayat’s son Reza Eslaminia, and Arben Dosti, were convicted of the murder, primarily based on testimony from Dean Karny. Both were released on appeal using evidence from Joe’s second trial.

Wasn’t Joe guilty of fraud or something?

Yes. Joe readily admits to financial misdeeds. He became the unwitting head of a Ponzi scheme when Ron Levin, a con man, bilked him out of a half million of his investors’ dollars, leaving Joe holding the bag. The 23-year-old Joe naively overextended himself when he took Levin at his word that he would fund a large commodities investment intended to repay investors with a handsome profit. Instead, Levin assured Joe he could proceed with a purchase made with nonexistent funds. That’s when law enforcement got involved.

Do you have proof that Ron Levin was really a con artist?

Have a look at this Secret Service document (at left), his criminal history, his FBI rap sheet, and this news article.

Why is a petition needed if his trial was botched?

We need a petition BECAUSE the trial was botched. This Los Angeles Times article about the biased judge in the case explained:

“Lawyers Arthur Barens and Richard Chier have accumulated a host of complaints they say constitute judicial misconduct and the basis for a motion for mistrial they plan to file this week. It will charge, Chier said, that Rittenband deliberately elicited prejudicial evidence against Hunt by questioning witnesses, that he belittled and banished defense staff from the courtroom, that he frequently refused to allow the defense to approach the bench to voice objections and that he aligned himself with the prosecution by grimacing, smirking and showing impatience and disbelief at crucial points in the defense’s cross-examination of witnesses.” 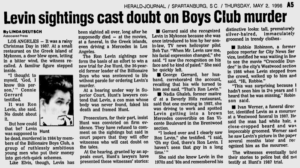 Do you have proof that the dead guy, Ron Levin, was seen after the murder date?

If anyone had a good reason to “disappear,” Ron Levin did. He was out on bail at the time of his disappearance, due for a court appearance on fraud charges, and facing multiple civil lawsuits and an FBI investigation. Levin left a swath of angry fraud victims in his path, to whom he owed millions. One even held a gun to Levin’s head, but Levin talked his way free.

Multiple people, several of whom knew Levin personally, reported seeing him after the date of his supposed murder. All testified under oath and passed lie detector tests. Have a look at the Associated Press story at right. Also, there’s a Los Angeles Times story about the sightings.

Unfortunately, the judge, known as a “prosecutor’s judge,” ignored their testimony.

Wasn’t one of the sightings witnesses, Robbie Robinson, debunked?

Robby Robinson failed an inadmissible police polygraph and later passed another polygraph with flying colors. He was called as a witness in the 1992 trial in San Mateo and the jurors found him highly credible. Thus, the notion that Robinson’s testimony was debunked, is a canard. A strong inference to be drawn is that Beverly Hills Police Department’s polygrapher was playing “team ball” when he reported that Robinson had failed the first polygraph.

Robinson came forward as a witness in the first trial on April 17, 1987, and the prosecutor disclosed to the defense the existence of the witness April 21st. Joe was convicted on April 22nd. Joe’s defense attorney declined to interview Robinson or do an independent investigation of the sighting. Subsequently, it was discovered that Joe’s defense attorney had a conflict of interest that made him disinclined to investigate or present sightings witnesses.

So, in sum, what happened with Robbie Robinson was just another aspect of the miscarriage of justice that was the 1987 trial. For more details on this subject, please see this extended explanation.

Lots of people thought they saw Elvis after he died. It doesn’t mean they did if they can’t produce him. I need hard proof that Ron Levin is alive.

If Ron Levin has been sighted, why don’t they bring him in to show he is still alive?

Why should he get parole? I’m glad he changed his life around in prison, but that doesn’t bring back the person he killed.

That is true — if you believe he committed a murder. We believe Ron Levin is a fugitive, not a corpse.

Joe’s commutation application includes 537 letters, including one from a prison guard who said, “I would place him solidly in the top 1% as far as suitability for reintegration with society.” And Asha Praver, director of Ananda Church, said, “Joe has gone farther toward remaking his life in an image of righteousness than most men could ever claim, in or out of prison.”

What is Ananda Church?

Ananda Worldwide is a global spiritual movement, based on the teachings of Paramhansa Yogananda, author of Autobiography of a Yogi (and one of the people on the album cover of Sgt. Pepper’s Lonely Hearts Club Band) Here’s a link to a video with more info.

He did defraud people with the Ponzi scheme though.

Yes. “I was in many ways a jerk in my 20s,” Joe said in an interview. He regrets everything about those bad decisions — the lies, the financial scheming. But if Joe had been imprisoned according to sentencing guidelines for fraud, he would likely have been released more than two decades ago.

This is absolutely true: African Americans are incarcerated at more than twice the rate of whites in America. Problems with the criminal justice system disproportionately impact minority communities, by an extremely wide margin. But any person who knows the anguish of having an innocent yet incarcerated family member knows this: we cannot be silent.

We strongly agree with the ruling of the European Court of Human Rights: life without possibility of parole sentences are a violation of human rights.

Why don’t you get the Innocence Project to defend him?

Unfortunately, the Innocence Project only handles DNA cases. Without a body or murder weapon, there is no chance of DNA testing.

Why don’t you get President Trump to help?

Unfortunately, President Trump can’t help because it is not a federal case.

Okay, I signed the petition.

Thank you! Would you please also share this link on social media? https://freejoehunt.com/2018/11/10/the-joe-hunt-case-the-basics/